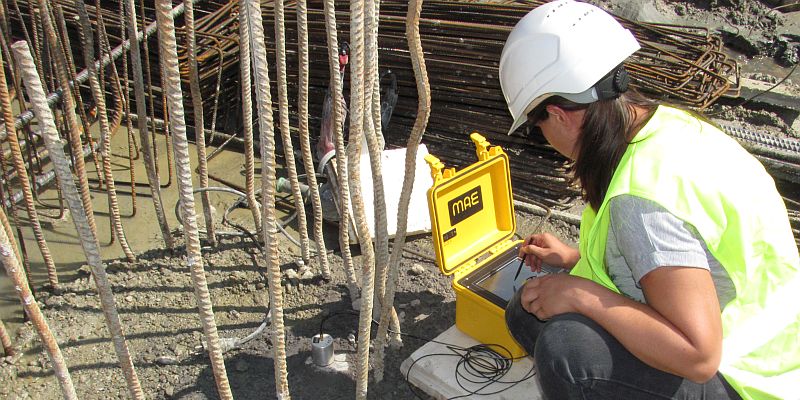 The tests we perform are closely related to the mentioned works, namely:

In order to determine quality of executed foundation elements which are implemented up to several tens of meters deep in the ground, to test the deep foundations, micropiles and piles, we use two methods. One is a static pile load test, while the other and non-invasive method is PIT.

The static pile load test includes a massive load (defined by calculations) by a hydraulic press onto the executed pile and settlements measurement at the load, in order to assess whether the executed pile can hold the designed loads. This is a very expensive procedure and is rarely performed.

Pile Integrity test (PIT, Pile integrity test or PET, Pile echo test) is performed with our M.A.E. equipment and software for data processing. It is a non-invasive method that, based on the reflection of sound, sonic/acoustic waves through the pile, determines whether there are discontinuities/defects or a pile is whole. Particularly important when executing piles in materials where the risk of material debris falling is high or there is a justified fear of segregation of concrete.

The anchors are a very important element, either in landslides improvement, pit protection or slope stabilization, whether they are active or passive, it almost always comes to the same, which is tightening (inserting force into the anchor) at the designed force. To have the anchors tightened to a certain force or to perform anchor control, there are trial and working anchors, we use our calibrated hydraulic presses, micro gauges and cylinders. Depending on the type of a press, either manual or automatic, we test anchors to different forces, and the most up to 1.000 kN.

In the chapter “WATER INVESTIGATION WORKS” more or less the following tests are described: camera for prospection of boreholes/wells (up to 300 meters in depth), static and dynamic water level measurement (DIVER), sampling and testing of water in accredited laboratories, pumping tests (most commonly in well structures) by various methods, more commonly known are „step test”, and “constant rate pumping test”.

It should be noted once again that when an obstacle in the borehole happens or simply there is a need to check what is happening at the certain depth in some well, we own a “PASI” camera with which we conduct video prospection up to 300m deep. After the performed works, the report is prepared together with the ‘’video clip’’ of the recorded borehole/well.

Water pumping test from wells is performed by aforementioned methods in order to assess the capacity of the well or in layman’s terms to learn how much water there is and which pump should be chosen for pumping. We have more submersible pumps for investigation pumping, pumping tests. We have pumps of 3 “, 4”, 5 “, 6”, 8 “, 10”, corresponding water meters, also mentioned in the chapter “EQUIPMENT”.

To measure the water level at pumping, we use our water depth meters, which measure up to 150m, and depending on the need we also use the automatic groundwater level meters – divers. They can give us information about groundwater levels for every 0.5sec to 99hours, and can measure the level at depth of 100m below the ”as found’’ ground water level in several wells at the same time.

You have a new project or need advice?

Feel free to contact us and we will be happy to assist you.

Our Certificates
Go to Top